September was a gruesome month for investors. Equity indices dropped on average 10% in the US and globally. Strong unemployment numbers in the US, despite the restrictive monetary policy conducted by the Federal Reserve (Fed), combined with inflation numbers that have yet to decline decisively, contributed to a meltdown in stock and bond prices.

The S&Ps’ 500 sunk 9.21%. All other US equity indices fared similarly. Internationally, performances were generally in line with US markets. The EPAC BM Index of developed economies dropped 10.61%. So did emerging markets with the MSCI (EM) down 11.72%. The strong USD contributed to these negative performances. It rose 3.15% in September, when measured against a basket of major currencies.

The bond market followed equities in their downward trajectory. US Corporate bonds fell 5.26% overall. The US long-bond dropped 7.90% while the high yield sector eased 3.98% (Bloomberg US High Yield Index).

The chart below illustrates the monthly CPI and CPE over the past twelve months. 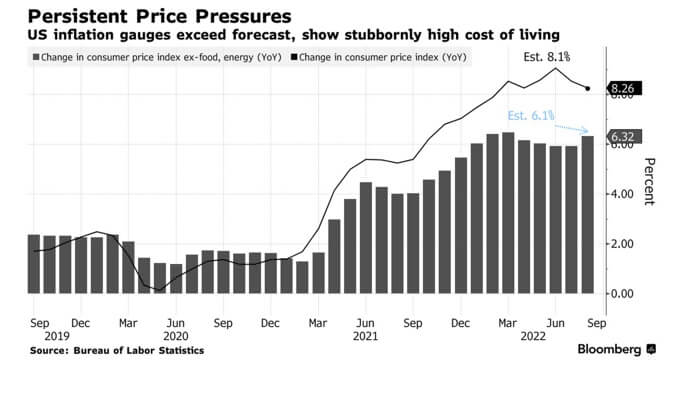 The September numbers were not good. The CPI remains elevated on a year-over-year basis at 8.1% and the CPE (another measure of inflation) at 6.3%. Investors expected better numbers and showed their disappointment with heavy equity and bond sales throughout the month.

In September, our median portfolio lost 5.95%. Over the same period, a portfolio consisting of 50% ACWI (All Country World Index) and 50% AGG (US Bond Aggregate) declined 6.75%. On a YTD basis, our median portfolio has lost 22.50% vs. 20.05% for our index.
As a reminder, the equity allocation in our clients’ portfolios varies currently from 40% to 70%, depending on risk profile.

The monetary policy conducted by the Fed is restrictive. It is aimed at reducing inflation by reducing the demand for goods and services. It is intended to slow the economy.

However, when one important measure of economic slowdown (the level of unemployment) does not budge or even improves despite aggressive interest rate increases, the likelihood of more interest rate tightening and for longer grows, generating higher investor anxiety and bringing about heavy selling. This is what happened in September.

Before its latest rate increase at the end of September, the Fed had raised its benchmark rate by 2% without really slowing the US economy. The chart below illustrates the level of unemployment claims since May when the robust interest rate tightening phase started.

Since then, after rising through the end of July, initial claims have dropped. While this data is volatile, the trend is markedly downward and indicates that unemployment is not rising. If unemployment does not rise, consumption is less likely to slow and the chance of it having a dampening effect on inflation is lessened.

Hence, the very forceful Fed talk that has spooked markets and investors that can be summarized as follows: “We shall fight inflation and raise rates for as long as we do not see an improvement in the level of overall inflation. If we must break the economy to get there, we shall”.

Hopefully, we will not get to that point. In fact, the signs of a slowdown are appearing here and there, if not yet in the overall level of employment. Home sales have slowed consistently since July and the price of some commodities has dropped significantly, oil and lumber being prime examples. If these early signs of economic slowdown are confirmed, one could expect the Fed’s stance to become less restrictive. This would then increase the chance that equity and bond markets stabilize ahead of a much-needed recovery. We might be a few months away from that though.

In September, I sold completely out of our DLR positions. US Reits have suffered with the last bout of interest rate increases. DLR has lost 18% of its value in September alone. Fortunately, I sold all our remaining positions ahead of the last phase of the meltdown in the last two trading days of the month.

In the fixed income sector, I reduced our AGG positions and replaced them with short-term treasuries. With yields approaching 4% on 3 and 6-month US treasuries, these securities have become an attractive alternative to cash and offer an excellent mitigant to the risk inherent to fixed income investments in that they remove its credit component (presumably the US government will never default, although Congressional shenanigans over the recent past have made this less of a certainty).

The chart below illustrates the rising yield on the 3-month US bill over the recent past and compared to the past ten years.

We have entered a new financial environment. The sharp increase in rates in the past nine months is unprecedented. Its effects on the US and global economy are expected to help control inflation. They should.

However, there is something different about the current economic conditions. They were induced by Covid and the many disruptions the pandemic brought about in its wake. Responding to them with the traditional (and blunt) tools of monetary policy by raising interest rates precipitously may not be the most elegant or efficient way to improve them, including the overall level of inflation.

The economic data released between now and the end of the year will tell us whether equities and bonds have a chance of recovery in 2023 or if the pain incurred in 2022 is likely to endure.

I am hopeful that the sharp interest rate increases of the past three months will soon show their effect on inflation. If they do not, the Fed will continue to ratchet up interest rates, forcing investors to sell equities and bonds in the process.

Our prudent stance in 2022 has not allowed us to avoid the general market mayhem as well as I would have hoped. It has been a terrible market. One of the worst since the early 1980s. This is giving me pause.

As a matter of investment policy, I hesitate to go to cash (or equivalent) but may be forced to do so should the soon-to-come economic data fail to move in the direction the Fed expects.
Please feel free to reach out to me with any questions. Thank you for your continued trust.Jeff de Valdivia, CFA, CFP
Fleurus Investment Advisory, LLC
www.fleurus-ia.com
(203) 919-4980